Inoculation is worth a pound of cure 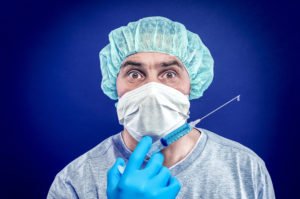 t a pound of cure, after exposure to a harmful element, is far more expensive and painful than the cost of dealing with the issue before it becomes harmful.

When Ben Franklin first imparted his advice, he did not limit it to medicine.  Far from it.  His statement is an analogy that is relevant in nearly every facet of life – including politics.

When deciding to run for office, candidates must be honest with themselves.  They must take stock of their shortcomings and their “youthful indiscretions.”  Candidates must take full account of their controversial decisions and votes.  They must inventory their own “derogatories” because any opponent with a scintilla of common sense will have their own catalog of your shortcomings with which they might attack.

A campaign should be able to identify the one or two issues most likely to be used in an attack.  Once this is known, creating a plan to mitigate or even prevent an attack is imperative.

In politics, this process is referred to as “inoculation”.  Inoculation can come in many forms, but the idea is that a campaign take control of an issue, and tell its own story, before the opponent decides to go on the attack.

Direct mail is an excellent venue to deliver an inoculation.  A campaign should be able to target the audience deemed most important in order to win a campaign.  A campaign can pinpoint, with amazing accuracy, the precise households that will be most receptive and impacted by an inoculation message.

As with television and the Internet, direct mail is a visual medium.  A campaign must be able to tell a story with powerful images, while using as few words as possible, to achieve its goals in direct mail.  If a candidate wishes to inoculate against a youthful indiscretion, for instance, using a photo of a youthful candidate while describing the “offense” is an effective way to contrast with a more mature candidate now.  Another critical element in an inoculation effort is to explain how the recovery from the youthful indiscretion makes the candidate a stronger, better choice than if the incident never occurred.

Another reason direct mail is an excellent medium to use is the fact that it is more difficult for an opponent to track.  When a campaign purchases television or radio, a public record exists that is available to the opposition.  The opponent will know the exact audience that the campaign is trying to reach, and that allows the opposition to mount a counterstrike.  With direct mail, the mailing list that a campaign uses is proprietary.  Unless the opponent is engaging in some level of unlawful espionage, the mail list is known only to the campaign manager and the mail house – both of whom have professional obligations of confidentiality and nondisclosure.

In some cases a campaign may want to increase the effectiveness of its inoculation message.  A corresponding digital campaign can be targeted to IP addresses associated with the mail list used for the inoculation direct mail piece.  This tactic ensures that the same households targeted for direct mail will also be targeted for the digital ad.  The digital ad can link to the candidate’s web site, social media, or another location that is designed to tell the same story in the direct mail.

The nature of inoculation means that a campaign is choosing to be proactive before the opposition wages an attack.  There is never a guarantee that an opponent will go on the attack.  However, a compelling case can be made to create an inoculation when the issue in question is one that will move voters.  The motivation towards inoculation becomes stronger if the issue is one that is available in public records.  Another factor to assist in the decision to create an inoculation message is the resources of the opposition.  By studying publicly available finance reports, a campaign can evaluate if the opponent has enough resources to issue a negative message.

Whether or not to issue an inoculation is a decision that a candidate should not make on his or her own.  Objective, experienced, and skilled consultants can help guide a campaign in tough situations such as these.  The professionals at Gravis Marketing are experienced and trained to handle the most difficult campaigns.  No matter what situation you are facing, Gravis has been there.  Gravis can help you tell your story, and Gravis can help you identify the exact audience for each story.