Why Spin It When You Can Own It? 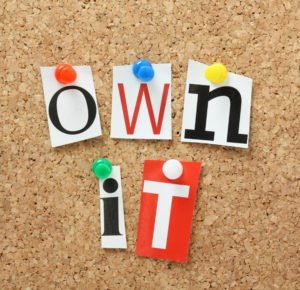 Conventional political wisdom when a candidate is faced with a scandal, controversy, or caught in a generally difficult situation is to either spin the situation or to pivot and redirect.  Neither of these responses directly addresses the issue, and both allow for the possibility for the issue to rear its head in the future.

On the other hand, it may be advantageous for a candidate to openly address an issue, own the issue, and control the issue.

In the history of American politics, every candidate for office has been, presumably, a human being.  Not a single human being breathes on earth who has not made mistakes.  Mistakes, how we handle them, atone for them, and learn from them shape who we are.

We do not place our mistakes on our resumes, and candidates do not typically run for office by putting their worst foot forward.  So how do we effectively deal with our mistakes, or our candidates’ mistakes, when we are reasonably certain that they will become issues on the campaign trail?

Just as no candidate in the history of politics is without sin, no voter is devoid of making mistakes.  The difference is that the voter is not wearing the same target that the candidate is.

Before explaining why owning an issue may be the correct path for a candidate, we should explore why spin and pivot techniques may be the incorrect path.

“Spin” is generally considered a biased method of retelling history or explaining an event or decision.  The problem with spin is that it requires the candidate or campaign team that is responding to tacitly concede that the situation to which they are responding is a negative situation.  Another problem with spin is that most voters may not be able to define what “spin” means, but they know it when they see or hear it.  Spin usually works only with the devoted following of the candidate delivering the biased message.  Spin only addresses a small audience and generally serves to restore confidence in a candidate’s base rather than speak to undecided voters.

In essence, spin is a form of triage in the political battlefield that is designed to stop the hemorrhaging of a candidate’s support.  Spin should never be used as a long term solution.  In fact the use of spin may not be advisable in any situation because it is often viewed as dishonest.

For example, a candidate for the United States Senate may have had a very successful fundraiser.  Many dignitaries attended, the open bar was flowing, and everyone had a good time.  The candidate has a lapse of judgment and decides to drive home.  On the way home, the candidate is pulled over for suspected intoxication.  The resulting video is embarrassing as the candidate used the feeble “do you know who I am” line that was clearly recorded on the officer’s camera.  The candidate also refuses any tests to indicate inebriation.

The following day, that campaign team chooses to spin the story and claims that the Senate candidate was not inebriated but merely tired from a very long day of campaigning.  The campaign attempts to explain the use of the thinly veiled “do you know who I am” threat as the candidate’s effort to merely help the police officer understand what kind of day she had.  The candidate’s devoted followers quickly accept the story, but voters who were previously leaning towards voting for that candidate are now in the “undecided” category.  Stalwarts of the opposition, however, are able to take pot shots at the cover story and use the situation to increase mistrust.

The “pivot and redirect” method is also a less than optimum choice because the essence of redirecting requires that the candidate does not answer to the negative issue or situation.  Instead, the idea is to distract voters with another issue.  This method may be successful if the issue upon which the candidate can pivot is egregious enough to divert voters.  However, an unanswered situation may revisit the candidate’s campaign at an inopportune time.

In the situation described above, the same Senate candidate’s campaign chooses the pivot method instead of spin.  In responding to the situation, the campaign creates an elaborate story in which they blame the opposition for falsely tipping the police to their candidate’s whereabouts on the way home from the fundraiser.  In a double-down effort, the campaign points out that there is no evidence of driving while intoxicated since the candidate refused a breathalyzer and invoked the Constitutional right to an attorney.

In doing this, the candidate provides an opportunity for the opponent to take control of the media.  The question still remains whether or not the candidate did something wrong.  The issue is not closed and can return.  Also, the only audience that will buy into the pivot response are the devotees of that candidate.  Voters who were not solidly in that candidate’s corner are now shaky.

By owning the issue, however, a campaign takes full control of the media.  The campaign does not hint at the opposition.  The embattled campaign addresses all voters and not just the dedicated followers.

In the same situation, the Senate campaign holds a press conference the following day to address the traffic stop.  The candidate begins by telling the story of a young person in their state who was recently killed by a distracted driver.  The candidate talks about statistics involving intoxicated drivers, distracted driving, and driving while fatigued or sleepy.  The press conference discusses safe driving and the need for all drivers to be responsible and how to be responsible and respectful when dealing with law enforcement.  The candidate apologizes for the embarrassing use of the “do you know who I am” phrase and to the officer specifically.  Finally, the candidate announces an initiative to address distracted driving while in Washington.

By taking full ownership of the event, exhibiting contrition, and proposing a solution to a larger problem (remember that the candidate talked about statistics of distracted driving during the press conference), the candidate controlled the issue and possibly turned it into a positive situation.  Not only are the devoted followers still on board, but all voters are listening to the message of the senate candidate.

The decisions on how to handle difficult scenarios are serious and can impact not only the outcome of the current campaign but the long term political viability of a candidate.  No candidate should address these dire situations without objective, skilled assistance.  The professionals at Gravis Marketing are experienced and trained to handle the most difficult situations.  No matter what situation you are facing, Gravis has been there.  No candidate should go it alone.  Let Gravis stand with you.